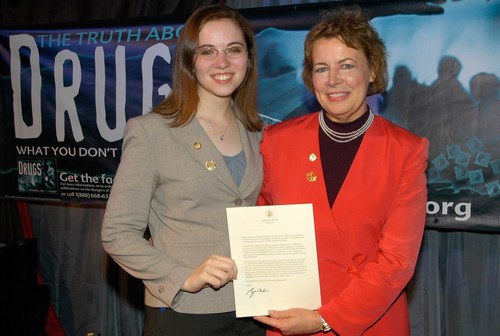 ST. LOUIS, Oct. 26, 2021 /PRNewswire/ -- To engage the community in taking effective action against the drug overdose crisis, St. Louis County proclaimed October "Drug-Smart Month." They encouraged everyone to be part of the solution by using drug education to reach youth before they begin to experiment with drugs.

Accepting the proclamation on behalf of the local chapter of Foundation for a Drug-Free World and its many community partners was Ellen Maher-Forney, director of public affairs of the Church of Scientology St. Louis.

Maher-Forney has been active in drug prevention for more than 30 years. She and her daughter Julie, who now serves as Director of Community Affairs at the Nashville, Tennessee, Church of Scientology, have signed up thousands of children on a pledge to live drug-free. In 2008, both mother and daughter received the Presidential Service Award for their volunteer service to the community.

More on Missouriar
The need for concerted action is clear. According to the proclamation:
The proclamation begins by stating: "An informed person can make smart choices when it comes to drug use."

It is particularly important to reach youth before they begin to experiment with drugs. The National Institute on Drug Abuse reports that the majority of those with substance abuse problems begin to experiment with drugs by the time they are 18. What's more, drug education is effective. The United Nations Office on Drugs and Crime states: "For every dollar spent on prevention, at least ten can be saved in future health, social and crime costs.

Foundation for a Drug-Free World is a volunteer-based organization. There are hundreds of groups internationally, many of them hosted by Churches of Scientology. The Church is the main sponsor of the program enabling the Foundation to provide this secular program and materials free of cost to drug educators worldwide.